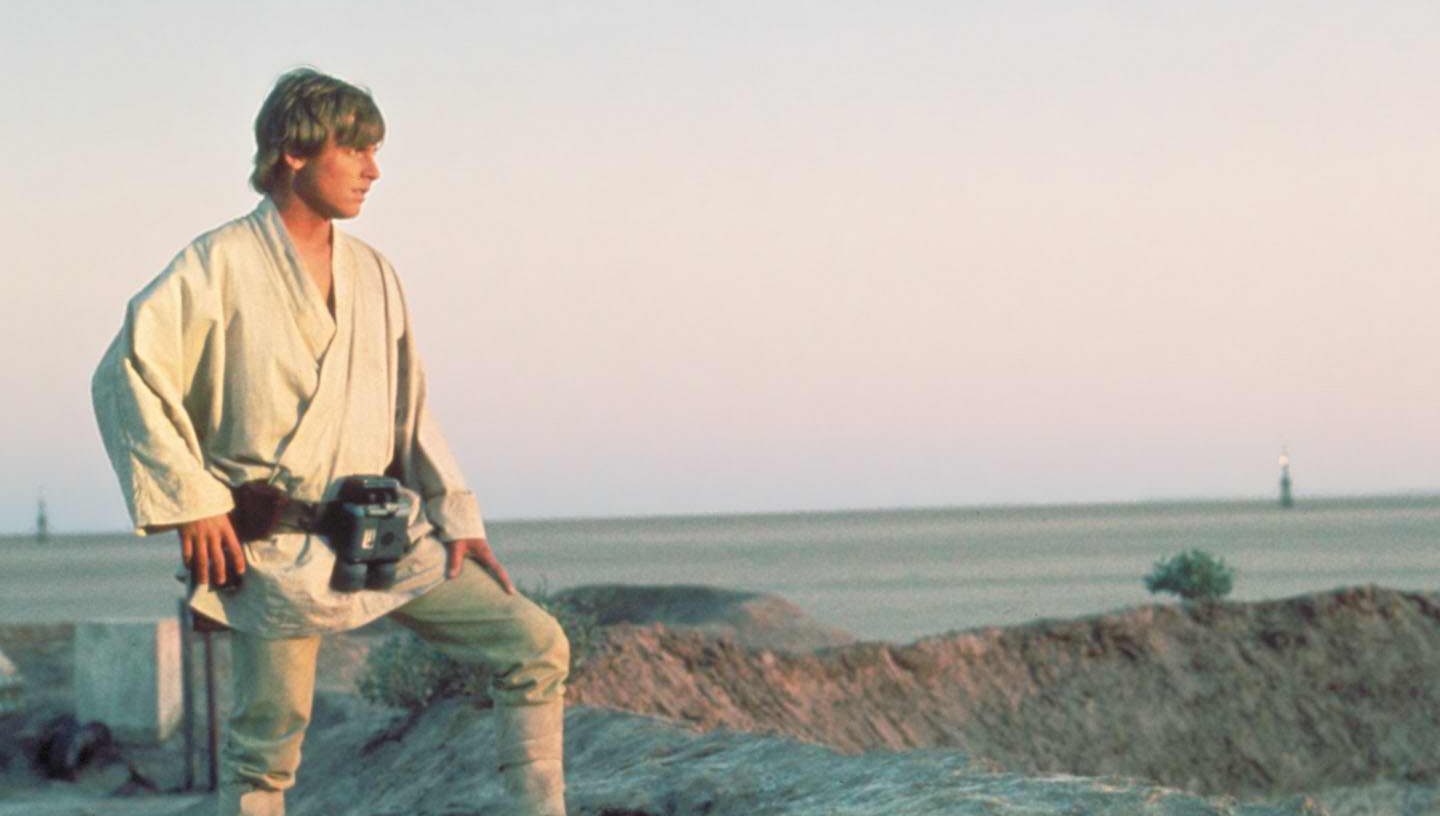 Back in spring 2016 (you know, when we still had hopes for 2016) the big news for a few hours was that Luke Skywalker might be bisexual. Or gay, or hetero, or whatever you want. According to Mark Hamill (and I consider him to be a fairly credible source when it comes to young Skywalker) it is up to the viewer to interpret the sexuality of Luke. But is that really correct?

I just read online that JJ is very much open to that. In the old days you would get fan mail. But now fans are writing and ask all these questions, ‘I’m bullied in school… I’m afraid to come out’. They say to me, ‘Could Luke be gay?’ I’d say it is meant to be interpreted by the viewer. If you think Luke is gay, of course he is. You should not be ashamed of it. Judge Luke by his character, not by who he loves.

Mark Hamill, quoted in an article in The Sun

Some people see this as a slap in the face of the fans. Probably because a lot of male people identified with him and are now afraid that they too will turn gay. Just like they also lost their hands when his was cut off and just like they all dress like him, talk like him and fly spaceships in actual space like him. I’m being ironic here, of course. Noone can fly a spaceship like Luke.

But if we actually examine it, look at the cases and try to see which way he’s leaning sexually – how does it all hold up? I mean, surely we cannot trust the actual actor to know anything about the character, right? Now, I’m only looking at the movies here. I do include removed scenes in some cases, but I stay clear of the Expanded Universe which means that Mara Jade isn’t considered proof. And yes, ignoring EU stings a bit in the soul, I know, but Disney did what they did and we must accept it.

So, judging by the movies, is Luke being anything other than heterosexual an option? In order to answer that question, first we must evaluate Lukes previous love affairs. And I’m starting with Biggs (did you feel that slap in the face, fanboys?).

Yes, it can be argued that they’re just good friends, and I actually agree with that notion, but we have to examine it anyway. It is pretty clear to me that Biggs is not interested in a romantic affair between them (regardless of sexuality) and that them being together is not really on the map, but there is one interesting aspect of this that might prove significant.

Luke does act like a fanboy towards Biggs. And the line between fanboydom and love is a blurry one. He’s also immature and impulsive. A typical teenager. We can’t know his true feelings for sure, and I would argue that even Luke does not know his own feelings here. When it comes to feelings, Luke is pretty unstable at this point and it’s not unthinkable that he has feelings towards Biggs that he can’t properly process or analyze.

I think it is safe to assume that heterosexuality is the norm in any world with a binary sexual reproduction system, so Luke has probably grown up assuming that he too is heterosexual. After all, his aunt and uncle are, his parents were (enough to have him at least) and all his friends seem to be. But is his affection for Biggs a sexual one or not? We’ll never know, just like Luke probably didn’t, but that also means that we can’t really say it’s not sexual. Lukes sexuality is neither proven or disproven yet, but the possibility of nonheterosexuality is there.

Next we have the scene where Luke sees Leia for the first time and says that she’s beautiful. This could indicate that her looks stir sexual feelings inside of him, but it could also simply be a conditioned response to a cultural heritage. He might simply think she looks beautiful without wanting to have sex with her. I think tigers are beautiful, but I wouldn’t want to have sex with one.

An interesting theory to throw out there is also that his exclamation was the product of a secret desire to dress and look like her, a wish to be more feminine, an urge to be trans. It’s not a path he seems to pursue though, so I wouldn’t say it’s very plausible. But it is possible.

After that we have very little going for a while, all the way until Luke sees Leia in real life in the Deathstar. He has an awkward reaction to her, almost as if he falls in love. Or as if he sees an actual royalty for the first time, who also happens to be one of the main leaders of the rebellion, a group his teenage mind holds in high esteem. There is also a strong Force connection between them and it could be this that he feels. And there’s the transvestite thing as well.

Henceforth, every single moment that Luke and Leia share together can be interpreted as being friendly. Had Leia been a guy everyone would have said that a romance between the two would be too far fetched – they’re only being buds! If there really had been anything between them they would have tried to explore that in the movie, especially in the brief downtime before the assault on the Death Star. This would have been a great time to go further with that plot, but instead all Luke gets is a small kiss for luck before flying to his likely demise. His reaction to the kiss seems to be romantic happiness, but it is not abundantly clear if the reaction is due to him having actual feelings for Leia or not. We are still not even clear on if he actually can tell his own feelings apart.

In all, “A New Hope” really doesn’t shed any light on the subject. Lukes sexuality is not evident yet. Or important for the plot, for that matter.

The Empire Strikes Back

There is a lot of sexual tension between Leia and Han in this movie, but at one point Leia kisses Luke. I would say that the kiss is not an important piece of evidence since it is clear Leia only does it to infuriate Han, but Lukes reaction is still a bit interesting.

Leia kisses Luke and storms off. Luke gives a smug smile and Han storms off. Is this a clear sign that Luke is heterosexual? No, not really. Lukes reaction makes Han storm off and if Luke is serious about getting it on with Leia at this point, this would be a great opportunity to go find her and make a move. But instead he calls out after Han since he realizes that Han is hurt by what happened. Possibly not in a sexual “let-me-comfort-you-with-my-penis” way, but in a “sorry-about-that-Han-my-bro” way. He still chooses to comfort Han rather than Leia.

And then Luke continues to do nothing to get the princess. It’s all Han and Leia flirting and Luke looses no sleep worrying about it. He is simply not interested. The rest of the movie is devoid of any kind of romantic interest from Lukes side. When Ben tells him that Leia is his sister, Luke makes a face as if things suddenly fall into place. Perhaps he has been contemplating his feelings towards Leia and found that while he does feel strongly for her – maybe even love her – he is not romantically or sexually attracted to her. Finding out that she’s his sister makes all of it fall into focus. Now it makes sense.

Return of the Jedi

There is no sexual tension between Luke and anyone in this movie. He has begun to grow, mature and get his feelings under control. He’s not an unfeeling robot, but he does not let his feelings rule him. Sure, Vaders threat to kill him and turn Leia to the dark side makes Luke go bonkers, but family is very important to Luke and the thought of his father corrupting his sister is not a pleasant one for him.

As with the previous three movies, this one has very little in actual romance. There are a few potential couples in there, but Luke is not a part of them and while his spirit (though not his actual spirit, which is a clarification I seldom get to make in other texts) is heavily present throughout the movie, his sexuality is not.

So, there is chemistry between Luke and Leia throughout the trilogy, but it is sibling chemistry. They don’t know that at first and this makes them a bit confused, but they never really feel attracted to each other in a sexual way. Luke is much more attracted to the idea of adventure and justice than to any one person.

So is Luke non-hetero? We don’t know. And to be honest, it has no real impact on the story if he is. It may give a bit more depth to him and it might make his relationship with Biggs a bit more interesting, but the story is still the same. Will it ruin your childhood? Only if you let it. Luke was never a romantic or sexual character and his story isn’t about romance or sex. So if Luke is homosexual, heterosexual, bisexual or even asexual is – just like Mark Hamill said – just a matter of interpretation.